Theodore Roosevelt “Ted” Poston was born on July 4, 1906, in Hopkinsville. He was a graduate of Attucks High School and Tennessee A&I State College. Commonly referred to as the Dean of Black Journalists, Poston wrote for the New York Post, covering major civil rights stories of his era. He was nominated for a Pulitzer Prize in 1949.

Poston, the Dean of Black Journalists, began a career at the New York Post in the mid-1930s and retired in 1972.

Poston’s Hall of Fame induction set for Thursday in Lexington

Poston, known as the Dean of Black Journalists, covered many of the country's major civil rights stories from the mid-1930s until his retirement in 1972.

Recognized as the dean of Black journalists in America, Ted Poston covered major stories on civil rights, politics and Black culture as a staff writer at the New York Post from the mid-1930s until his retirement in 1972.

The 2019-20 class of Leadership Hopkinsville-Christian County raised $10,000 to spruce up the porch and add several amenities for library patrons.

Ted Poston wrote the fictionalized accounts of his childhood growing up in segregated Hopkinsville as a personal project during his newspaper career. They were first published as a collection a decade after his death. 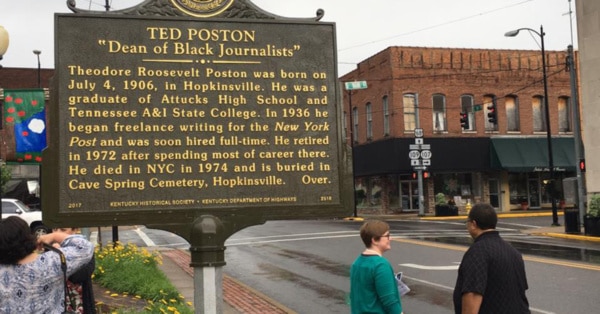 This will be a live, virtual presentation set for 6:30 p.m. Thursday, Nov. 19, streaming on the museum’s Facebook page.

The marker will recognize Mary Edmunds Bronaugh, who was among Kentucky's earliest female lawyers when she passed the bar in 1915.

The local markers, which are among 2,400 installed statewide by the Kentucky Historical Society, offer lessons in local history.

Robert Lincoln Poston started his newspaper work in Hopkinsville before moving to Detroit and then New York City. In 1934, he led a delegation to Liberia for black nationalist Marcus Garvey's organization.