A last-minute substitute to a bill "relating to financial institutions" contains major changes that diminish the public's right to know under the Kentucky Open Records Law. It's already passed in the House of Representatives.
Amye Bensenhaver|

Say goodbye to the Kentucky Open Records Law as we have known it for 45 years. Its fate rests in the hands of a largely hostile legislature.

Its last moments are literally ticking away. The House of Representatives suspended its rules to pass HB 312 this morning. Growing opposition necessitated immediate action.

Despite the valiant efforts of some lawmakers, the bill is on its way to the Senate where it is likely to be greeted with open arms.

Ask us what the new law changes about the old law and we will answer: It’s easier to tell you what it doesn’t change.

The committee substitute for HB 312, is, in reality, a substantial rewrite of the open records law. The committee sub was filed Thursday, heard and approved in committee the same day, and is “posted for passage in the Regular Orders of the Day for Friday, February 26, 2021.”

This is how law is made in Kentucky. Don’t look away for a moment or you will miss it.

The 45-year-old open records law is largely abandoned. An ill-conceived and poorly written substitute, containing multiple internal inconsistencies, is rushed through the House in 48 hours to replace it.

The major change is, of course, the residency requirement. That requirement — which would limit use of the open records law to residents of Kentucky — has been adopted in seven states (and repealed in two). It is being sold as a means of preserving public agency resources by eliminating harassing open records requests by nonresidents.

It will, we are certain, work a hardship on both resident and nonresident requesters as well as custodians of records who will expend needless energy trying to verify residency when they could be fulfilling requests.

Ignoring the logistical challenges a residency requirement imposes, let’s consider the impact it will have on national reporting of events in Kentucky. Consider the human toll it will take. Consider how it will isolate our state from legitimate inquiries — genealogical research, for example.

Unlike our lawmakers, we have looked at the viability of residency requirements in other states and written about it at length — including yesterday’s post. Please take a moment to read the post to better understand the threat to open government a residency requirement creates.

﻿But the residency requirement  is only one of several reasons the committee sub to HB 312 is bad.

There are several other changes that are deeply concerning.

No mention of new exceptions to the law

The sponsor, for example, didn’t even mention in committee that it includes an entirely new exception for litigation files of public defenders. This is an exception Rep. Jason Petrie began pushing in 2019. It is largely inoffensive since criminal litigation files of county and commonwealth’s attorneys are already exempt. But a new exception to the open records law is usually big news. It is independently scrutinized and vetted.

The very idea that there are so many major changes to the open records law in HB 312 that the sponsor did not bother to even mention this new exception is startling.

Requesters must use the government’s form

There is a new requirement that all open records requesters use a standardized form as a condition to obtaining access to public records.

This, too, is troubling. Permissive use of agency open records requests is common. But how many requesters will be discouraged from requesting records by virtue of their inability to access the form, the unavailability of the form, or their reluctance to use the form.

We reached out to other state open government coalition members on the National Freedom of Information Coalition listserv. No responding coalition indicates that its state law includes a “standardized state form” requirement.

Most egregious here is the creation of a standard of specificity for the records description that is very high: the form will require the requester to state “The exact nature of the documents requested.” This is a different and much higher standard than exists in statute or ever applied by the courts in construing  it. It is very problematic.

No solution to email question

As for the sponsor’s claim that the emailed request controversy will be settled by HB 312, we wouldn’t count on it.

The requirement that agencies adopt rules and regulations consistent with the open records law (KRS 61.876) has been in the law since its enactment in 1976. It remains one of the requirements that is regularly (almost universally) ignored by agencies.

The current law does not penalize noncompliance and neither does HB 312. We have no reason to believe that this will promote greater compliance with the longstanding requirement that agencies post rules and regulations or that it will resolve the emailed open records request problem.

It is an ill-conceived and unduly complicated legislative approach to the problem that could literally be corrected by eliminating the 2019 language and adding one word to KRS 61.872(2):

“The official custodian may require a written application, signed by the applicant and with his name printed legibly on the application, describing the records to be inspected.

The written application shall be hand delivered, mailed, *e-mailed*, or sent via facsimile to the public agency.”

HB 312 does nothing more than codify what the attorney general has been doing since we all realized that Sen. Wil Schroder’s 2019 law was an epic failure. Schroder’s bill achieved nothing and, many have argued, actually makes the situation worse.

The notion that the Legislative Research Commission’s denials of request for LRC/General Assembly records will be judicially unappealable is reprehensible. Any notion of checks and balances is abandoned.

LRC and the General Assembly need to be reminded from whence they draw their authority. These are the *public’s* records and not individual legislator’s records or records of the body as a whole somehow removed from the application of the law.

The LRC will be the absolute and final arbiter of access to its records. It is easy to predict how most access issues will be resolved — if LRC’s track record is any indicator. There will be no right of appeal to the attorney general (this has been so since 2003) and now the courts.

The courts dealt with this issue in 2019, rejecting the argument that existing law supported the interpretation advanced by LRC that the courts had no authority to review LRC’s denials of records requests (in that case records relating to allegations of sexual harassment leveled against a lawmaker, John Arnold).

HB 312 amends the open records law in the hopes of putting the final nail in the coffin of the public’s right to know how LRC conducts its business.

The cited case, by the way, is Becky Harilson v Shepherd and Lexington Herald Leader.

We analyzed the case in this op-ed:

We could go on, but these are the major points. Extending the deadline for agency response; creating a “litigation” exception that is at odds with existing language addressing the same issue found at KRS 61.878(1) is enough — these are some of the offenses against the public’s right to know that HB 312 will make under the new and  “improved” open records law.

According to Reps. Rowland and Petrie, the Kentucky Press Association supports or is “neutral” — a fine distinction — on this bill and assisted in its drafting. As I commented on Thursday, “ I don’t care if the KPA anointed the bill with holy water, it is a bad bill.”

There are reasons why the KPA is supportive or neutral.

But one thing is clear. The KPA opposed most of these same proposals when they were presented by Rep. Petrie in 2019. Covid prevented Petrie from introducing them in 2020. Only in 2021 has the KPA’s position dramatically changed. The proposed changes to the law have not.

There will be no editorials excoriating this bill. Regrettably, the KPA is, it’s fair to say, no longer the guardian of the public’s right to know.

At the time of its creation, the Kentucky Open Records Coalition had no expectation that it’s efforts on behalf of the public’s right to know would ever conflict with efforts of the KPA. But when citizens’ interests are subordinated to press-specific interests, we will not be silent.

Don’t be surprised if there are more insults to the public’s right to know in 2021. There are plenty of shell bills just waiting for new exceptions to public inspection to be introduced.

The open records law is 45 years old. HB 312 affects major changes and is a substantial rewrite of the law — from the public’s and non-GOP lawmakers’ perspectives — literally overnight.

HB 312 could have been filed earlier in the session (or even prefiled) to permit discussion and debate. There *was* nothing new in the language of the bill that necessitated additional effort, delay, or last minute filing as a committee substitute.

There *is* nothing in the bill that necessitates it being fast tracked.

This is a calculated attempt to abridge the public’s 45-year-old rights as covertly and “underneath the radar” as possible.

We are deeply pessimistic that we can save the open records law. It will emerge from this session a substantially weaker law.

But the public must understand what is happening to its 45-year-old open records law.

(Amye Bensenhaver spent 25 years as an assistant attorney general in Frankfort and is an expert on open records and open meetings. Now out of state government, she writes about these issues. Bensenhaver is a co-founder of the Kentucky Open Government Coalition with Jennifer P. Brown, who is the editor of Hoptown Chronicle.) 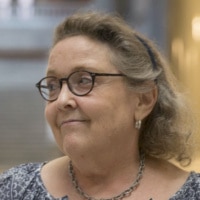 Amye Bensenhaver spent 25 years as an assistant attorney general in Frankfort and is an expert on open records and open meetings. Now out of state government, she writes about these issues. Bensenhaver is a co-founder of the Kentucky Open Government Coalition with Jennifer P. Brown, who is the editor of Hoptown Chronicle. Get news from the coalition delivered to your inbox by signing up for their weekly newsletter, The Transparency Project.