The General Assembly overrode a veto by Gov. Andy Beshear, who said the legislation would cost the state $200,000 to identify noncustodial parents. The federal government pays for the food benefits.
by Melissa Patrick,
Kentucky Health News|

The General Assembly has reinstated a 2018 policy that disqualified some non-custodial parents from getting federal food benefits if they owe child support. Gov. Beshear halted the policy by regulation in April 2020, citing the pandemic, and vetoed a bill to repeal the regulation. The legislature overrode him.

Senate Bill 65 passed along party lines after getting strong opposition from Democratic lawmakers, most strongly from Rep. Pamela Stevenson, D-Louisville.

“This bill is bad for two reasons,” Stevenson said in a House floor speech Tuesday night. “One, if we say we want people to be fed, children to be fed, and then we have a bill that says, if you don’t pay your bills, we’ll make you hungry. It makes no sense. Find another way to punish deadbeat parents instead of making children suffer. Or, tell the truth and say you don’t care. Either way works.”

Stevenson said the title of the bill, “An act relating to deficient administrative regulations,” made it easy to miss that it removed of Supplemental Nutrition Assistance Program benefits, formerly called food stamps, from thousands of Kentucky children. The bill dealt with three separate regulations.

In his veto message, Beshear said that the policy cost 6,011 children their food benefits, and that reinstating it would cost the state $200,000 to identify and investigate noncustodial parents who are disqualified. SNAP benefits are funded by the federal government but the state pays half the administrative costs.

Stevenson asked, “Now why would you make the state of Kentucky pay for something that the government will give; the federal government will concede to us? Why do you keep talking about, we don’t have enough money, but then when we get money, you don’t use it in the way it was intended? This is bad, bad, bad — and it makes me hungry,” she concluded in a flourish of emotion.

After sharing a personal story about how her family had benefited from food stamps while growing up, and that while she didn’t like the “disgusting Tuna Helper” that her mother was able to buy with those benefits, it was what they could afford.

“This bill, like many others, is punitive,” Raymond said. “It’s not going to do what we say it’s going to do. It’s not going to just give people a kick in the pants so they all of a sudden pay all that child support they’ve been withholding. They’re probably not able to pay it and that’s why their households are receiving SNAP.”

An analysis of the bill’s effects by the liberal-leaning Kentucky Center for Economic Policy found that the policy is ineffective at significantly increasing child-support payments and would worsen food insecurity across the state. The national Center on Budget and Policy Priorities has a similar report.

He said federal regulations allow states to disqualify non-custodial parents from receiving SNAP benefits for “refusal to cooperate,” which includes not paying court-ordered child support. He read a list of exemptions, including showing good cause for non-payment, living in a home with children under 6, being pregnant or three-months post-partum, enrolling in drug treatment, participating in state or federally funded job training, and more.

“This regulation really gets to those, as it says, who refused to cooperate,” Meade said. “The losers in this are the children who have single parents who are trying to make ends meet and put food on the table for them” but are shorted on child support. “It’s about holding people accountable to the taxpayers of this state, when they won’t take care of those children they need to be taken care of.”

Meade noted a March 29 WDRB story reporting that the Jefferson County attorney’s office has published a list of 3,400 parents who owe a total of $89 million in child support. The office says nearly 1,300 of the parents owe at least $25,000. 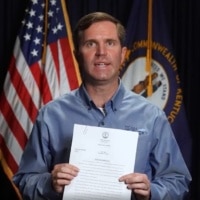