In these contentious and uncertain times, the wise words of Muhammad Ali ring truer than ever

Lonnie Ali, widow of the most influential Kentuckian ever, speaks her mind and does a better job than anybody of keeping Muhammad Ali’s legacy alive. So why don’t cable TV networks ever invite her to speak on important issues of the day, asks columnists Billy Reed.
by Billy Reed |
NKyTribune|

A few weeks ago, I had coffee with Lonnie Ali, widow of the most influential Kentuckian ever. She lives mostly in Arizona these days, but keeps a place in Louisville to oversee the Ali Museum and History Center.

Ali was married several times before Lonnie, mostly to glamour girls who used him. I mean, Veronica Porsche? Give me a break. But Lonnie truly loved him. She cared for him and protected him in his declining years.

I’ve always liked her because she is intelligent, opinionated, compassionate, and kind to people she trusts. She speaks her mind and does a better job than anybody of keeping Ali’s legacy alive.

Yet in these contentious and often ugly times, no cable TV network, even MSNBC and other liberal ones, have asked her to be one of those guest experts who are available to discuss new issues when they develop.

When I put the question to her, she only shrugged. She doesn’t understand it any more than I do. Given his worldwide popularity, Ali probably had many more followers than the Rev. Martin Luther King Jr. and other leaders who preached peace and love instead of hatred and violence.

It bothers Lonnie, as it does me, that Ali’s voice has been lost. That’s a shame, because he was concerned with many of today’s issues long before Donald Trump polarized our society as no enemy within has ever been able to polarize it.

If MSNBC or another liberal channel asked her to join their team, she surely would do so to make sure Ali’s voice is not forgotten. Personally, I think she would be an incredible addition to somebody’s lineup of commentators.

So why has she been overlooked and/or forgotten?

She is not one to draw attention to herself unless somebody wants to hear about Ali. Then she will speak eloquently about what he believed and why he did the things he did.

After beating Sonny Liston to win the heavyweight boxing championship in 1964 as Cassius M. Clay Jr., Ali angered many in White America by joining the militant Black Muslims out of Chicago, changing his name, and criticizing America’s participation in the Vietnam War.

To those folks, the ultimate indignity was when he refused to be drafted into the U.S. Army in 1967. He was called all sorts of things, traitor being among the kindest, and the white boxing establishment stripped him of his title.

His four years of exile came at that point in his career where he was physically at his peak. When he finally was allowed to fight again, he had to reinvent himself. No longer possessed of his physical excellence, he had to rely more on his wits and guile, as we saw most graphically in his “Rope-a-Dope” victory over George Foreman.

He also reinvented himself as a person. The angry young black man became an advocate of peace and love. This is the Ali that Lonnie remembers. It was his gift to the world, and it was meant to last long after his death.

In all the years I knew Ali, I rarely saw the poet in his soul. But he is given credit for the following five quotes, which deserve to be a big part of today’s discussion.

“Service to others is the rent you pay for your room here on earth.”

“It isn’t the mountains ahead to climb that wear you out; it’s the pebble in your shoe.”

“A man who has no imagination has no wings.”

“Hating people because of their color is wrong. And it doesn’t matter which color does the hating. It’s just plain wrong.”

Obviously, there’s some profound stuff in there, and only Lonnie can authoritatively comment on his thinking, his hopes for the world, and the inner workings of his mind.

So what are the cable TV networks waiting on? Lonnie would augment other commentators of color such as Joy Reid, Michael Steele, and the Rev. Al Shapton.

She would be worth every nickel they pay her. And think how much the downtrodden and disadvantaged around the world would love to hear from the woman who loved Muhammad Ali more than any other.

Our coffee meeting lasted more than two hours. We discussed our favorite memories of Ali. We discussed how much he loved children of all colors.

I showed her a photo of my daughter Susan’s adopted sons, whose family came from the Marshall Islands, and she lit up with a big smile.

“Muhammad would have loved them,” she said. “I can see in my mind his hugging them right now.”

I couldn’t wait to tell my daughter what Muhammad Ali’s widow had said about her boys, Shep and Sam. It definitely meant more to me than she will ever know.

I hope I see Lonnie as a guest commentator on one of the cable shows before we meet next for coffee.

The words of Muhammad Ali are worth consideration and discussion today more than ever. 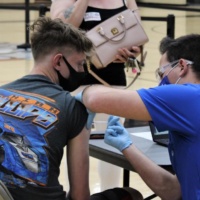 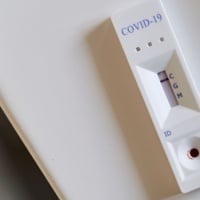